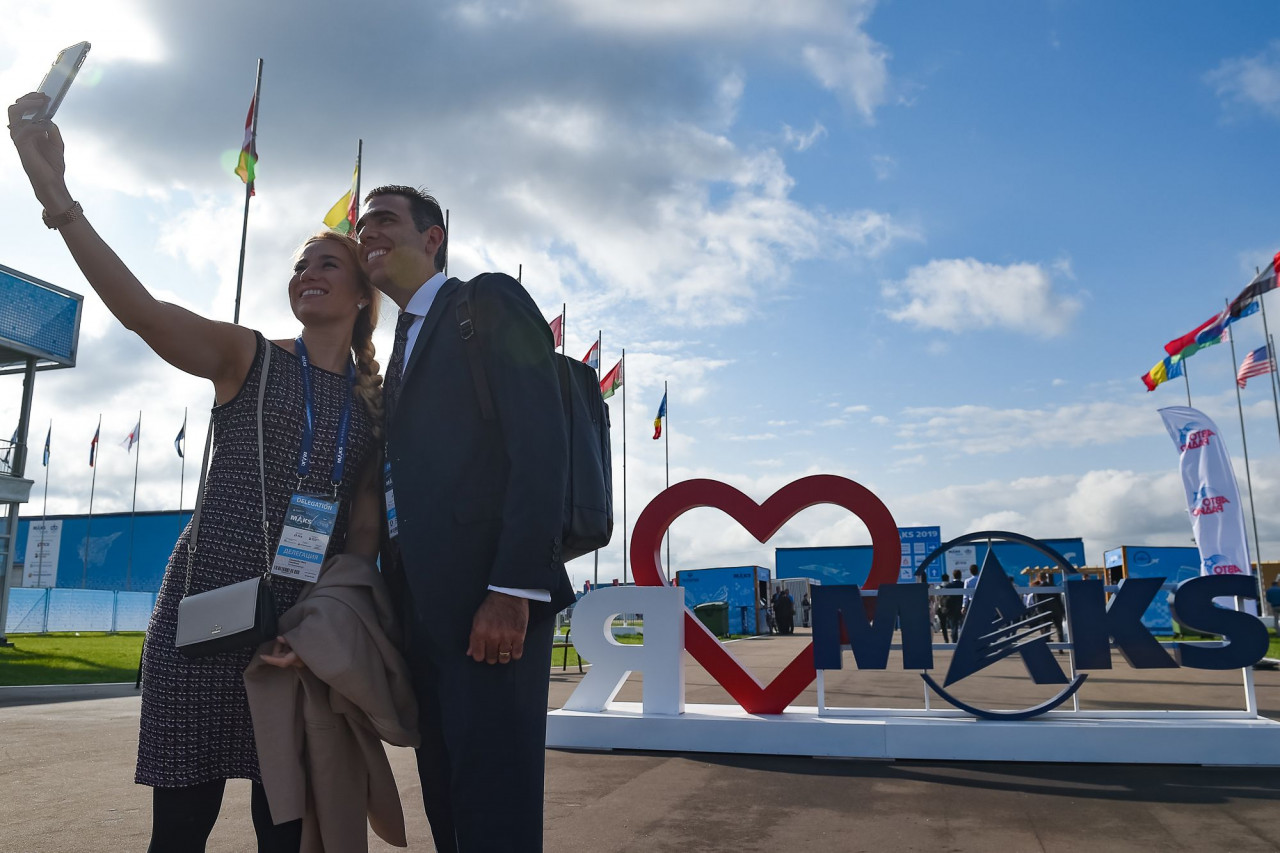 About a year ago, the world saw great changes. Lockdown has become the most popular word. The global aerospace industry has faced an unprecedented crisis, with the air traffic reduction in place of an increase, and a large number of stored aircraft in place of new aircraft deliveries. In the situation, organizers of Europe’s largest air shows decided not to hold exhibitions in 2020 and 2021 as the border closure seemed to scare off potential participants. MAKS organizers, on the contrary, are determined to hold the exhibition. Denis Manturov, Russian Minister of Industry and Trade and Chairman of the Organizing Committee, in his opening address to the meeting, instantly highlighted the focus: “…a large number of organizational tasks combined with the pandemic add certain difficulties and, of course, responsibility. But what’s most important is that MAKS is coming up, this has been agreed. It means that we are to hold the event at a high quality level, as we have always done.”

In his opening address, he focused on several key aspects. First, despite anything, MAKS is a large international event. “Our foreign partners, notwithstanding the COVID pandemic, say they are going to present their latest achievements and send their delegates to Russia,” said Mr. Manturov. “We have to take every opportunity to translate the rising interest in the event into new contracts, to exchange technologies and develop joint projects.” Second, the event will offer a multidimensional business program, with the Fourth Eurasian Aerospace Congress as a core activity. “It is essential to ensure the highest possible level of participants,” the Minister set the task. Finally, a special focus of the event is on the development of scientific, technology and human potential, and this will be done through new activities and events. “For the first time, MAKS will host a contest of unmanned aerial systems operation as part of the All-Russia Personnel for Digital Industry contest”, the Organizing Committee Chairman underlined.

To keep in pace with the new trends, MAKS 2021 has redesigned its concept. The concept was presented by Vladimir Sovetkin, Deputy Director General of Aviasalon JSC, at the Organizing Committee meeting. The first dimension related to the development of aircraft engineering and aerospace sectors in the new economic environment will be addressed through the exhibition and business programs. The topics to be discussed in the congress part include fostering domestic demand in Russian-made aircraft, developing after-sales services and switching to a service model where the manufacturers do not offer a product alone — an airplane or a helicopter, but a comprehensive service which includes ensuring readiness for departure, personnel training, etc.

The continuing trade wars and anti-Russian rhetoric of some Western politicians is a new reality in which domestic aircraft manufacturers need to seek opportunities to enter new markets, to create alliances and develop partnerships with foreign companies. MAKS 2021 continues to draw wide international participation According to Mr. Sovetkin, “…through communication with foreign companies, we have obtained preliminary confirmations from potential participants from 40 countries. We expect that the borders with these countries will be open.” The focus will be on interaction within the framework of the Eurasian Economic Union (EAEU). Joint Russia-Kazakhstan projects will be presented, including: localization of production of Mi-8 civil helicopters, building helicopter maintenance and repair centers, and SKD assembly and repair of LMS-901 Baikal and TVRS-44 aircraft.

The Eurasian Aerospace Congress will also cover the creation of partnerships in the Eurasian economic space. The event organizer is completing the preparation of the business program to include, in addition to the plenary session, nine conferences, several round table discussions and a reception for the Congress participants and guests. The topics reflect the industry’s global trends. The conferences will touch upon the issues of laying a scientific and technology basis for the supersonic business and passenger aircraft sectors, new generation aircraft engines, integration of drones into a single airspace, and innovative development of aerospace regions. For the space sector, issues of the development of multi-satellite constellations, space services, scientific space, manned space exploration, space biology and space debris control will be discussed,” said Nikolai Koptev, General Director of Vneshaviakosmos, the Congress organizer. Supported by the Ministry of Industry and Trade of Russia, the Ministry of Education and Science of Russia, Roskosmos and Rostec state corporations, the Union of Aviation Industrialists of Russia and other leading aerospace unions and associations, the event will be a top level. He added that invited are Yuri Borisov, Deputy Prime Minister of the Russian Federation, heads of Russia and Kazakhstan sectoral agencies, the Eurasian Economic Commission executives, representatives of the State Duma, and heads of scientific and educational institutions.

The third dimension of MAKS is a look into the future, development of scientific, technology and human potential. Today, the global industry is on a threshold of electric and hydrogen revolutions, commercial supersonic aircraft are coming back, unmanned aerial vehicles are rapidly entering the market, and dozens of new projects are emerging around air mobility every year. Becoming the race leader requires proactive creation of a scientific and technology base. Russian sectoral and academic institutions together with educational institutions will present their innovations, including a demonstrator of electric power plant technologies designed on the basis of Sigma-4, a demonstrator of a hybrid power plant based on the Yak-40 flying laboratory, and a project of Partizan STOL aircraft. Sverkhzvuk (“The Supersonic”), the world-class scientific center will present its Strizh developments. The State Aviation Systems Research Institute will demonstrate its synthetic vision developments.

Personnel training for high-tech industries is a most critical issue that will shape the position of Russia in the aircraft engineering and aerospace sectors in the coming decades. Therefore, MAKS gives priority to the topics of personnel training and interaction of educational institutions with science and industry. One of the exhibition’s initiatives to be presented by the Moscow Aviation Institute will be a program of individual educational trajectories. Companies seeking for young talents will help to prepare training programs focusing on the disciplines and priorities they think essential. Traditionally, on the Student Day, university students will be invited to visit the exhibition free of charge to learn about the talent programs offered by the industry leaders and take part in job fairs. With these priorities, the Future Hub section, which brings together science and education, will significantly expand the range of the exhibits.

In 2021, the salon will continue with a number of activities which first appeared in 2017–2019. For example, special expositions of general aviation topics and unmanned aircraft systems. A separate pavilion will host the United Engine Corporation’s exposition. The world’s leading business aircraft manufacturers have expressed their wish to present their developments, so the static parking lot will include a business jet section.

The “Made in Russia” expositions where the leading aerospace regions present the products and services of their companies, will have new content in 2021, including interaction of the aerospace industry and civil aviation sectors, such as creation of maintenance centers, spare parts distribution and training aviation centers.

Also, the Organizing Committee meeting included reports on ensuring flight safety and public safety at the event. The meeting approved the Head of the Interdepartmental Control Commission to ensure compliance with flight rules with account for safety requirements.

There are only four months left before the start of the year’s key aerospace event, which will fly by as one day. During this period, we have to address many related matters, finetune the business program and complete preparation of the exhibition program. So far, the event has clear outlines and fixed dates: July 20–25, 2021. See you at MAKS 2021!